Mufulira Lodge No 5326 was consecrated on Saturday 2nd January 1932. The Founders are listed (minutes of meeting dated 17th April 1931) and shown in the accompanying photograph (and were from both English and Scottish Constitutions). The Lodge was sponsored by Lodge Luangwa No 4820 EC. 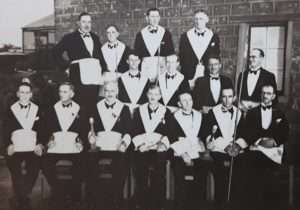 Founder members on the date of Consecration January 2nd 1932

It is of historical interest to note that Victoria Fall Lodge No 3527 EC was consecrated on 29th December 1931, the officiating officers (from District) travelling from Livingstone up to the Copperbelt for the Mufulira consecration some three days later.

Mufulira Lodge 5326 EC echoes with the history of freemasonry in Zambia. It was one of the earliest EC Lodges consecrated in the then Northern Rhodesia and today is the oldest active Lodge in the EC in Zambia. Initial years were characterised by highly committed and proficient masons and this carried through to the 1960s when the Lodge provided the first two District Grand Masters (E.S.Speck and V.E.Peterson) of the newly formed District Grand Lodge of Zambia. The majority of the brethren in the earliest years were all generally professionally associated with the mining industry, and thus fluctuations in the copper industry similarly impact on the Lodge. The newly commissioned mine actually closed down eight days before the Lodge was consecrated on Saturday 2nd January 1932, and several meetings were held in Mufulira before the Lodge was transferred to Kitwe (and for which Dispensation was given). The move back took place on 21st February 1934 when meetings resumed in Mufulira. The fabled story of the Charter being dropped in the Kafue river on one of the journeys to Kitwe is evidenced by extant water staining on the document that is displayed in the Lodge. Post 1970s the evolution in nature of the minerals industry resulted in greater diversification in membership, but this was still prone to the variations in the metals industry. The Lodge must have become firmly established in Kitwe as the motion to move back to Mufulira was challenged (presumably by Brethren permanently resident in Nkana (Kitwe) at that time and would have formed the nucleus of Jubilee Lodge).

The history of Mufulira Lodge can be considered in several broad periods:

Any boundary between the different periods is gradational and very arbitrary. The 50 year anniversary coincided with the 600th Regular meeting. Commemorative copper slices were made for this milestone.

A total of circa 300 Members have been raised to the sublime degree of Master Mason at Mufulira. These are names as recorded in the Declaration Book and does not include joining members and omissions. It should be noted that through the 2000s there have been very few initiations/workings so the number are really more representative of the Lodge in its stronger years pre 1990. Some facts:

Whilst costs have generally been commensurate with other lodges in the Districts the following Summons extract is of interest. “In March 1964 Initiation fee was changed to £52.10, to include subscription to the end of the current year with each Initiate receiving a MM’s apron after being raised to the rank of MM. The annual subscription to be set at £6.6.0 (payable in advance), of which £2.2.0 to be allocated to the Steward’s Fund. The joining fee to be set at £10.10.0 to include subscription for the current year. Amounts payable to the Benevolent Fund to be as follows:

The Lodge has made routine contributions to masonic and non masonic charities. Details of such are recorded in the minutes and treasurer reports. As well as donations to established bodies, there have also been donations to individuals (educational and medical). In the 1960s Mufulira became a double patron of the Royal Masonic Hospital through its donation of one hundred guineas to projects in progress at that time (Wakefield Wing). These older practices have tended to be superceded by donations to local establishments, as demonstrated by gifting of blankets through the Masonic Charity Fund of Zambia.

The current building was dedicated on 15th April 1950 at the 20th Annual Convocation of the District Grand Lodge of Rhodesia, the first meeting in the new building having been held on 21st February 1950. Prior to this construction, a building in the Mine area was used for masonic meetings. The location of this has not been identified by the current members, but old photographs show it to be steel roofed brick building that could readily accommodate forty people. The current building had an initial cost of some £3500. This included an interest free loan of £1000 from John Edward (‘Chipurula’) Stephenson and which was repaid over a period of four years through a building fund set up specifically for that purpose. (At that time the average wage was $40 per month so repayment within the required period was a highly commendable achievement.) Extensions were made early on to the original edifice and this included the kitchen, refectory and ante rooms as they exist today. Construction involved physically input from the Brethren themselves who devoted time (and money) to completion of the building. After well over 50 years of usage the current building is due for significant renovation.

Daughters and Other Degrees

Mufulira sponsored Jubilee Lodge No 5582 EC in Kitwe in 1935, and Itawa Lodge No 7072 EC in Ndola in 1951. When approached the lodge declined to sponsor Coronation Lodge No 7329 in Chingola, suggesting that Roan Antelope take up the option of doing so (meeting 20th September 1949).

Royal Arch Chapter Charter No 5326 was granted on 28th July 1954 and the Mufulira Chapter was consecrated on Saturday 18th December 1954. Formation of the Chapter had been discussed over several years, and by early 1950s was more forcibly driven by Vernon, Speck and Rannie. The Charter was surrendered in the 1990s mainly due to struggling membership (and when a lot of the regalia was passed on the Jubilee RA Chapter in Kitwe).

A total of 173 exaltees are recorded in the Mufulira Royal Arch ledger which extends from consecration to the middle 1970s. Names post this date to surrender of the Charter are being compiled. The first Grand Inspector of the Zambian Group of Royal Arch Chapters was Ex Companion V.E. Peterson who was a companion of the Mufulira Chapter.

The Copperbelt of Installed Masters No 9136 EC was consecrated on Monday 22nd July 198???? at Mufulira with Mufulira being the sponsor and the Warrant being domiciled with the Itawa Lodge No 7072 EC in Ndola. The Officiating Officer was the MW The Pro Grand Master, the Rt Hon Lord Cornwallis, and the Master Designate was MW J.Wesson the DGM of the DGLZ. Of twelve Founder members at least eight were brethren of Mufulira Lodge.

Talk of formation of a Mark Lodge was mooted in 1953 and again in 1954 but nothing subsequently happened.

A Preceptory of Knights Templar and Priory of Knights of Malta came about in July 1955, driven by E.J.S.Walker who became the first Emt. Preceptor. Strong interest was shown by the Mufulira brethren, some travelling to South Africa for instruction and admittance to the relevant order. The Coer de Lion Preceptory No 350 was consecrated 11th March 1957 the ceremony being performed by Emt. Knights from the Grand Priory. The Preceptory subsequently struggled for numbers and was transferred to Luanshya in the 1980s. There was also a Conclave of the Red Cross of Constantine (Conclave No 213) in existence in the early 1960s.

Lodge Border Eagle was formed / consecrated in 2nd March 1955 and was prominent on the fraternal scene in Mufulira until its closure in the 1990s. On the formation of Border Eagle Lodge, the initial proposal metamorphosed from discussion of a second English Lodge to that of one of the Scottish Constitution. When Border Eagle suffered conflict within the Lodge requests from some brethren to transfer to the English Constitution were refused, those brethren being encouraged to resolve their difficulties internally (which actually happened to the benefit of the lodge). The idea of a second English lodge in Mufulira continued through to 1956 following which the idea was abandoned (although progress was such that the name of Copperbelt Lodge had been proposed). Visitations between the two constitutions became very regular and routine as recorded in the Mufulira Lodge minutes.

Whilst it is not customary to single out individuals in the fraternity there are several names that can be flagged for their dedication and commitment to Freemasonry. These include (but by no means confined to, and in fact is somewhat arbitrary as there have been many committed masons in Mufulira):

District Grand communications have been held under the banner of Mufulira lodge. The sight of vehicles packing the car park and the outside environs no doubt caught the inquisitive interest of passers by.

The first banner for Mufulira Lodge was paid through a £10 donation from A.Bancroft who was unable to attend the second installation. The banner which is of relatively simple design has seen many years service and apart from some repairs done in the 1950s has stood the test of time relatively unblemished.