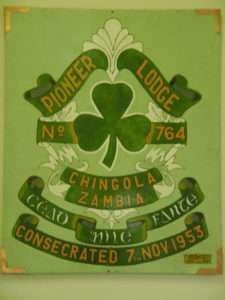 There are no minutes or other records for the Lodge prior to the Consecration Ceremony, with the exception of account books, which show that the first payment of Lodge dues was made on 21 March 1953. By the time that the Lodge was Consecrated there was a total of £31-5-0 in the account, quite a large sum for those days.

The Lodge was Consecrated on 7 November 1953 with Rt. Wor. Bro. J.H. Mitchel, Provincial GM, Rhodesia, in the chair. The consecrating officers were, as S.W. Wor. Bro. A Wroth, Asst. DGM, Rhodesia, (EC) and J.W. V. Wor. Bro. Dunlop, Hon. GSD, Depute DGM, Rhodesia, (SC). These distinguished Brethren were assisted by other Wor. Brethren from the three constitutions. It should be noted that Pioneer Lodge, as the name suggests, was the first Irish Constitution Lodge in Zambia, then Northern Rhodesia and any Irish Constitution Members at this Meeting were from outside Northern Rhodesia.

It should also be noted that there is no mention as to where the first 21 “Foundation Members” came from in the Roll of Members.

The ceremony started at 5.30 pm. And by 9.30 pm. the Lodge had been regularly consecrated and the first Officers installed with Wor. Bro. T. Little as Wro. Master, Wor. Bro. J.E. Johnson as foundation IPM, a Past Master of Dublin Lodge. At this meeting the first candidates for initiation were proposed, a Mr. RH. Jardine. He was proposed by Bro. Jardine, presumably his father and also Mr. K.D. Cooke, proposed by Bro. Cooke, again presumably his father. There was also a proposal for Bro. Trueman, a MM of Lodge David Livingstone No. 1368 SC to be a affiliate Member of the Lodge.

The charity collection at that meeting raised the sum of £29-4-4 which was donated to the Masonic Charities Fund of Rhodesia.

Unfortunately, due to the lack of the first attendance register I am unable to comment on the number of brethren present at either this meeting or the first several meetings of the new Lodge. There is also no record as to which Lodge “sponsored” Pioneer Lodge as prior to the consecration meeting, there are no records of any kind relating to the preparations for this meeting.

The first Stated Communication was held on 14 December 1953 at 7.45 pm. At that meeting a MM from Lodge David Livingstone became a member of the Lodge. Mr. Cooke was balloted for successfully, but the ballot for Mr. Jardine proved unsuccessful. At this first Stated Communication the by-laws for the Lodge were adopted. This first meeting ended at 10.45 pm after a short refreshment break of 25 minutes.

There appears that there was a problem in the Lodge with the proposition of candidates because in the minutes of the meeting of 10 May 1954 the following proposal was made:

“The proposal for a new candidate should be handed in a sealed envelope to any member of the Standing Committee who will hand the same to the Secretary before the meeting commences. The Secretary will open the envelope, without prejudice, and note the names proposed. This order will be adopted for the registration of candidates”.

At the same meeting it was proposed and adopted that one of the antient charges should be read at each meeting as a form of instruction to the brethren.

The first annual Installation meeting took place on 20 November 1954 and started at 5.00 pm. At this meeting there was a letter read giving the apologies of the PGM, PAGM and PG Sec. and suggesting that September would be a more suitable month to hold the installation meeting. The ADGM Rhodesia (EC) Wor. Bro. Wroth was the most senior mason present There is no mention of any other senior masons being present from any of the three constitutions. At this meeting there were 88 brethren in attendance.

During the second year the Lodge continued to grow with a total of six gentlemen initiated, six brethren passed to the second degree and five brethren raised to the sublime degree of a master mason. There were also two brethren affiliated from other Lodges. During this year, Mr. Jardine was successfully balloted for. He was initiated in May 1955, passed in August and raised in May the following year.

At the meeting on 13 June 1955, a letter was read from Bro. Hyden intimating that there was a possibility of forming a Lodge under the Irish Constitution in Mufulira and requesting the Lodge to assist with sponsorship. The letter was referred to the July meeting. After the July Meeting, there is no further mention of this proposed Lodge in the minute book.

In October 1955 a letter was read from Bro. T. Little, requesting Pioneer Lodge to be one of the sponsor Lodges for a proposed Lodge in Lusaka to be called Downpatrick Lodge. There was a proposal of a Notice of Motion to agree to this request. The Notice of Motion was presented at the Meeting of 12 December 1955 and was carried.

The Installation of 5 November 1955 was held under dispensation and saw Wor. Bro. Ward installed into the chair.

At the meeting of 12 December the possibility of a Lodge under the Irish Constitution in Mufulira was again recorded. It was stated that the Scottish brethren, who already had a Lodge in Mufulira, Lodge Border Eagle, were in favour of this proposal.

In the minutes of the May meeting it is recorded that the Consecration Meeting of Downpatrick Lodge in Lusaka was to be held. A date is not mentioned, however, it is noted that all brethren, if possible, should travel to Lusaka.  No further mention of this meeting is made in the minutes, nor is there any report about either attendance, or the ceremony.

In the June minutes mention was made of the possibility of opening a Lodge under the Scottish Constitution in Bancroft. Forms were supplied for members of Pioneer to be registered as Founder Members of the new Lodge.

In June 1956 the first defaulter was struck off the Register of Members under Rule 156 BOC.

In October there was again mention made of the formation of another Lodge, this time under the English Constitution in Bancroft, this Lodge to be called Bancroft Lodge.

During the year there were a total of eleven Regular and four Emergency Communications and a total of six gentlemen initiated, eight brethren passed to the second degree and five brethren raised to the sublime degree of a master mason. There was also one brother affiliated from another Lodge.

In the minutes of the Installation Meeting of November 1956 it is recorded that the Lodge banner was presented and had been made by two Members of the Lodge.

During the year there were a total of eleven Regular and two Emergency Communications and a total of five gentlemen initiated, four brethren passed to the second degree and six brethren raised to the sublime degree of a master mason.

During the years Pioneer Lodge has gone through both fat and lean times with Membership both increasing and decreasing.

The Meeting dates for the Lodge are the second Tuesday in February, June, August and November with the Installation on 4th Saturday April.

All the above Meeting dates to be confirmed with the Secretary, P.O. Box 10404, Chingola.